Harrison’s article is also a discussion and advocacy of an essay by Bruno Latour, “Why Has Critique Run out of Steam? From Matters of Fact to Matters of Concern,” [Critical Inquiry 30, no. 2 (Winter 2004): 225-248. [https://doi.org/10.1086/421123]. Harrison thinks that ‘critical religion’ has valuable things to learn from Bruno Latour, and I think he is probably right. But I need to be clear what is being suggested. END_OF_DOCUMENT_TOKEN_TO_BE_REPLACED

V. B. Meyer-Rochow*, “What to Enter into the Box Marked ‘Religion’?”

Nov 15, 2017
I am certain this has happened to many of our readers too, and often I’m at a loss how to respond to it. It’s that little rectangular box marked “Religion” that requests you to fill in your reply. In some cases, the form that contains this question already contains a list of the major (or let’s call them “established”) religions plus perhaps the option “none” or “other”. The respondent then simply needs to tick only the one most suitable term on the list. Perhaps this is not so much of a problem for those who consider themselves adherents, members, or followers of some of the “established” religions that are on the list. However, even they may struggle when they wish to specify which ‘branch’ or ‘stream’ of their religion they belong to, but have no way to do so – at least not when these forms are on the web and only allow one to choose just one of the options given in the dropdown. And what about the options of “none” or “other”? The term “none” is ambiguous as I will explain below and “other” can be unsatisfactory if not outright upsetting to someone, who regards his or her unlisted religion as important and on a par with the established religions. END_OF_DOCUMENT_TOKEN_TO_BE_REPLACED

Jerry Lembcke, “CNN’s Tailwind Tale: At the Intersection of Journalism, Myth and Religion”

Nov 9, 2017
On June 28, 1998, The New York Times ran an op-ed piece with the title “Memories of Wars Never Fought.” Written by Joe Sharkey, the article caught my eye because I had just finished a book on war and public memory. My research had taken me into the study of how groups of people remember major events like wars and how easily the boundary between memory and fantasy can be crossed. Sharkey’s article told about a story recently aired on the Cable News Network (CNN) and published in Time magazine claiming that the U.S. Army had secretly used nerve gas in 1970 to attack a group of its own soldiers who had defected to the North Vietnamese. As the title of Sharkey’s piece implied, the New York Times was skeptical of the CNN story.

I was more than skeptical. Indeed, my first thought was that the story was a hoax, something like the article that Alan Sokal published in the cultural studies journal Social Text in 1996. Sokal, a physicist, wrote a parody of the academic field known as literary criticism that was loaded with postmodern jargon in order to demonstrate that some of America’s leading intellectuals would publish nonsense if it flattered the editors’ ideological preconceptions. I thought some clever individuals had managed to “put one over” on the CNN reporters in the same manner. Perhaps the reporters themselves were implicated in the prank. In a few days, I was sure, someone, maybe even one of the tricksters, would step forward to reveal their mischievousness. END_OF_DOCUMENT_TOKEN_TO_BE_REPLACED

Oct 5, 2017
We, as human beings, always seek some explanations in our life, mainly due to physical and psychological survival needs, and we do so based on some assumptions: our realities that we exchange with others. This is also true for explaining disasters. We all try to explain a disaster we face with our perception of reality. In their work about ‘appraising the meaning of disaster’, Grandjean et. al (2008: 195) state that ‘the human tendency to expect an effect proportionate to its cause could be the ultimate origin of our perception of justice’. In other words, our perception of justice is something related to our comprehension of reality. The question of why I faced this or that situation in my life is, in fact, a question about the perception of justice. Its implication is clear: Did I deserve this? END_OF_DOCUMENT_TOKEN_TO_BE_REPLACED

On a balanced critique: (or on the limits of critique) 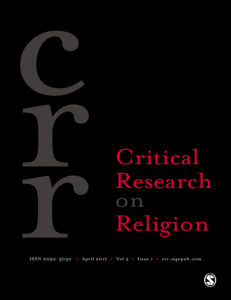 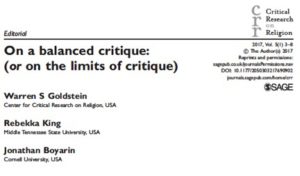 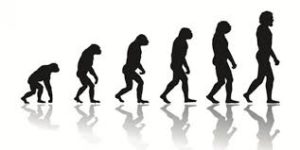 Turkey is an interesting country, in every sense. To keep track of the political agenda is quite hard; having a comprehensive knowledge of it is nearly impossible. This is true not only for Turkey but, in the countries lacking pluralism, having a political agenda is becoming much more complex for the citizens. This is because public policies are produced in an anti-democratic environment. In such a reality, individuals must be well-organized and capable of engaging in a profound analyses of the issues. Such a necessity is essential for the politicians and bureaucrats who have the power to set the political agenda as well as for the reporters, scholars, representatives of civil society, etc. who try to focus on the issues, interpret the hot topics, produce alternative knowledge, and “enlighten” the public. END_OF_DOCUMENT_TOKEN_TO_BE_REPLACED

Steven Engler, “Why be critical? Introducing a symposium on Capitalizing Religion”

The debate over the CRR Editorials continues… 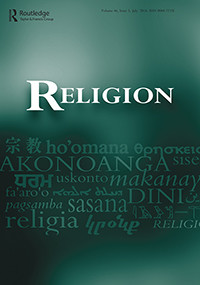 “To Boston From Kabul with Love” by Christopher Craig Brittain 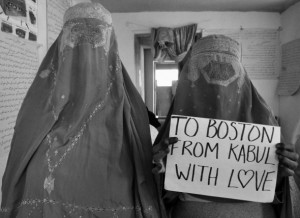 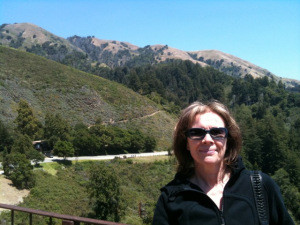 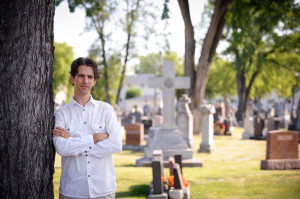 Announcing the December 2022 (Volume 11, No. 1) issue of Critical Research on Religion:

"Child Adoption among Igbo Christians in Nigeria: A 'Paradox'?"
Fabian U Nnadi
Kingsley I Uwaegbute

“'The Exodus into the Utterly-New': Between Hope and Despair"
Agata Bielik-Robson

"Bloch’s Münzer and the Horizons of History"
Christina Petterson

"Between Hope and The Overman: Ernst Bloch and The Anti-Christ"
Matthew King

"Giving the Angel the Benefit of Law: Natural Law and Human Dignity in Franz Neumann and Ernst Bloch"
Matt Sharpe