Matthew Recla, “Homo profanus: The Christian martyr and the violence of meaning-making” 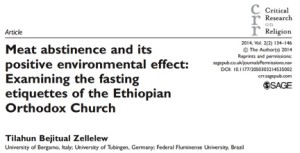 Hanan Ibrahim, “Approaches to reading intercultural communication in the Qur’an and the politics of interpretation”

The full review can be found at: http://crr.sagepub.com/content/2/2/195.full.pdf+html

He does engage some significant scholarly literature in the discursive endnotes. The lack of critical analysis of sources and the periodic historical confusions in his narrative, however, suggest that Zealot is not a historical investigation. His presentation of Jesus’s “life and times” (a modern genre) appears rather to flow out of his formative training in fiction. In some chapters he appears to write his “life” of Jesus directly from episodes in the Gospels, somewhat like the nineteenth century lives of Jesus reviewed by Albert Schweitzer a hundred years ago.

Aslan’s book is a throw-back to the 1950s and 1960s when some scholars were still debating whether Jesus fulfilled “the Jewish expectation” of “the Messiah.” In the “60s” one of the hot topics was whether Jesus might have been a “Zealot,” a violent revolutionary. While Zealot is not a book that would have been written by someone trained in New Testament studies today, it shares what were the standard assumptions and conceptual apparatus until forty or fifty years ago. Aslan claims to have read some of the serious challenges to them posed around thirty years ago, yet simply collapses them back into the old assumptions and concepts.

Central to the standard older construction of “Judaism” in New Testament studies were the four “sects” or “parties:” the aristocratic priestly Sadducees, the Pharisees known for their expertise in the laws, the Essenes who had withdrawn from society, and what modern scholars called “the Zealot party.” Scholars constructed “the Zealots” as a movement that agitated for seventy years until they finally sparked “the Jewish revolt” in the summer of 66 CE. Into this “catch-all” category were lumped virtually all of the figures, protests, brigand-bands, and resistance and renewal movements in the years from 4 BCE to 70 CE that are mentioned by the Judean historian Josephus. The historian of religion, S. G. F. Brandon, had the audacity to claim that Jesus himself was a Zealot (Jesus the Zealot, 1967). In reaction — and in anxiety about escalating anti-colonial movements and student demonstrations against Western governments’ wars of counter-insurgency — leading New Testament scholars used “the Zealots” as foil over against which to present Jesus as a pacific prophet of non-violence, even non-resistance.

With more critical analysis of Josephus’ accounts, however, scholarly investigations in the 1970s and 1980s systematically deconstructed the concept of “the Zealots” and identified the different social forms of the various popular movements and scribal protests. It became clear that there is simply no evidence for the older construct of “the Zealots.” Aslan is not deterred. He does “get” at least that the only group actually called “the zealots” was the coalition of peasants displaced by the Roman reconquest who converged on Jerusalem in 67-68, after the great revolt was well-underway. But he insists on reviving the synthetic catch-all construct, now in lower case, “zeal/ zealotry/ the zealots,” and again collapses all of the groups, protests, and movements that took different social forms into a widespread general drive of the Jews to revolt.

Aslan identifies the old construct of zealotry with Jewish nationalism (xxx) and fuses it with apocalypticism (19). Most problematic, however, is his insistence that all these zealous revolutionaries were led by messiahs. He is clearly still working with an extremely broad and vague older concept of “the messiah” of the Jews, and simply ignores some of the critical scholarship he claims to have read that has deconstructed it. Beginning in the 1960s scholars began to recognize that the term “anointed” occurs only rarely in late second-temple Judean sources, and that the rare occurrences of the term do not allow us to conclude that “the messiah” was a standard leadership role or title. Aslan, however, simply reverts to the standard older synthetic understanding of the Jewish expectation of “the Messiah,” just as he reverts to the older construct of “zealotry.” He asserts that the principal task of the messiah as the son of David “was to rebuild David’s kingdom and reestablish the nation of Israel” (19).

Ironically, while he claims to rely on the series of articles that clearly distinguished the different social forms of the popular resistance and scribal protest, he collapses the different leadership roles into “messiahs.” This seems appropriate only in the case of the popularly recognized “kings” who led peasants in revolt in 4 BCE or 67-70 CE, such as Judas son of Hezekiah, the brigand chief. But Aslan claims also that Hezekiah himself was a messiah and his bandits were zealots (19). Similarly, he makes the popular prophets who led movements in anticipation of a new act of deliverance in the 40s and 50s CE into messiahs ((49-50, 53, 79, 106-7, 134). He even makes the scholar-teacher (sophistes) Judas of Gamla/ Galilee, who led the fourth philosophy’s resistance to the tribute in Judea in 6 CE, into a messiah who claimed the throne of David (43). Aslan’s fusion of Judas the scholar-teacher with the popular king Judas son of the bandit-chief Hezekiah thus involves him in an utter confusion of the events in Judea in 6 CE with earlier events around Sepphoris in Galilee in 4 BCE.

This is the chronologically and conceptually confused basis for Aslan’s revival of the zealots led by messiahs who aimed to rebuild the kingdom of David. Some “were willing to resort to extreme acts of violence if necessary” (41). Aslan sees this zeal as deeply rooted in the ancient Jews’ “sense of exceptionalism,” including the belief that God had commanded them (e.g., in the “holy war” passage in Deuteronomy 20) to “smash the heads of the gentiles” and drive out the Romans (16). Aslan’s nationalistic revolutionary “zealotry” goes well beyond what NT scholars were still imagining 50 years ago. And it ignores the critical delineation of the distinctive social-political forms of Galilean and Judean resistance to the Roman imperial order in Palestine.

Aslan then attempts to fit Jesus of Nazareth into this composite scheme of zealous apocalyptic Jewish nationalism as a zealot messiah who aimed to fight against the Romans and reestablish the kingdom of David (77). He aspires to “paint a picture of Jesus of Nazareth that may be more historically accurate than the one painted by the gospels,” which he dismisses as Christology. Yet to construct his zealous messiah he “cherry-picks” images, phrases, and episodes from the gospels without critical analysis of his sources, and repeatedly elaborates far beyond what a saying or episode suggests. Most ominous among his exaggerations is his take on Jesus’ proclamation of the kingdom of God (115-126) as an articulation of God’s wrath against outsiders, including the slaughter of foreigners who occupied the land of the Jews (121-122).

Like many Americans in general, many university students, and even some New Testament scholars, Aslan assumes that the Gospels were written to prove that Jesus was the promised messiah (154). Yet he is sufficiently well-read to recognize that the Gospels do not support his claim (135-6). He repeatedly attacks the Gospels’ for supposedly portraying a pacifist preacher (xxviii-xxix; 150, etc.). He derives this picture, of course, not from the Gospels themselves, but from their interpreters.

The Gospels, however, if examined as complete stories and speeches in the historical context that recent research has delineated more comprehensively and precisely, present Jesus as broadly and deeply politically engaged, in a more complex way than can be imagined in the conceptual straightjacket of zealotry. The earliest gospel sources, Mark and the Q speeches, present Jesus not as “the messiah” who would lead a revolution and then rule over a kingdom, but as a prophet leading a movement in the tradition of Moses and Elijah and others. Unlike the other prophets who called their followers out of the villages, however, Jesus worked in and sent his cadre of “disciples” to work in village communities. This “community organizing,” the renewal of mutual aid and cooperation in covenantal communities, however, was threatening to the Herodian and high priestly rulers. Still adapting the traditional role of Israelite prophet, moreover, Jesus engaged in more direct resistance to the Roman imperial order in Palestine, particularly in condemnation and forcible demonstration against its face-and-form in the Jerusalem temple-state. This disruptive prophetic action of Jesus appears to be what provoked his arrest and crucifixion by the Romans as a rebel leader. His prophetic action and martyrdom then appear to have become the “breakthrough” for the movement he had been catalyzing, as it expanded rapidly in Galilee, Judea, and beyond, and followed his example of bold resistance despite the threat of trial and execution.

One must wonder what it is that Aslan is seeing or addressing that leads him so far beyond the sources and the critical scholarship on which he is drawing in oversimplifying the complex historical situation and the diverse resistance to Roman rule in Palestine, the ancient Middle East. Might Aslan, who has written previously about fundamentalism, terrorism, and jihadis in the contemporary Middle East (Aslan 2009), be influenced by current religious-political conflicts? and/or might he be addressing them?

Much of the American Press has labeled virtually all protests and opposition movements in contemporary Southwest Asia as “Islamists” or “jihadis,” regardless of their stated concerns and local circumstances. Has the stereotype of Jihad and militant Islamist nationalism become so accepted as the defining discourse of contemporary Middle Eastern insurgency against the modern day Rome that an analogous zealous apocalyptic nationalism can be projected back onto “the Jews’” under ancient Rome, and all forms of resistance be lumped under zealotry? Or is Aslan trying to blunt American Christian and Jewish support for “the war on terror” by arguing that Jesus and other ancient Jews were just like the jihadis? Or, is he trying to call attention to what he sees as some of the historical roots of contemporary Christian and Jewish Zionism, with their claims about the “chosen people” and the God-given claim to “the Holy Land” (a highly charged phrase that he uses throughout the book)?

Criticism of religion remains as important as ever, especially given the current political-religious conflicts that have been oversimplified as a “clash of civilizations” and distorted by the Orientalism of the likes of Bernard Lewis. A key aspect of criticism is analysis of what became deeply influential scriptures and culture-texts and iconic figures and founding heroes, including a clearer sense of the circumstances of their origins. This entails moving beyond previously standard assumptions and stereotypes, including the essentialist “-isms” constructed by modern scholarship. Once they are read as complete stories of political-religious conflict in their historical context of political-religious conflict, it is clear that the Gospels portray Jesus as deeply and pointedly engaged in resistance to the Roman imperial order in Palestine. Both “zeal/zealotry” and “the messiah,” however, whether separate or (con)fused, are modern Christian scholarly constructs of fifty to a hundred years ago.

Ukraine President Zelensky and the Schlemiel in Jewish Literature