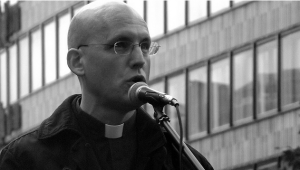 One thing that the three religions of Christianity, Islam and Judaism share in common is respect for the ancient story of Abraham and Sarah. All three traditions view these two people as models of religious faith. I’d like to say something about why this is, and what it has to do with the Occupy movement.

Christians and Jews know the version of the story as it is told in the book of Genesis. God comes to Abraham and Sarah and asks them to pack up their things and move on to a land they have never seen. Even more surprising than this, God tells this childless elderly couple that after they move to this new land, their descendents will be as numerous as the stars (Gen 15:5). At first Abraham is bewildered, and Sarah laughs at the impossibility of it all. But in the end, they decide that if this is what God calls them to do, they will pack up and go. Without any evidence that this incredible idea will turn out well, they agree to follow God into the unknown. And because of this act, Christian, Muslims and Jews think of Abraham and Sarah as models of what faith is like.

In the New Testament, the Apostle Paul describes this act of faith as an act of ‘hoping against hope’ (Rom 4:8). He writes, ‘Abraham did not weaken in faith when he considered his own [elderly] body, which was already good as dead’ (Rom 4:19). He and Sarah can only proceed as if God’s promise will be achieved. And what happens: their descendents now number among the millions who call themselves Jews, Muslims, and Christians.

Today we gather to support and pray for those who have gathered here to witness to the promise of a better society, and a better world. Like Abraham and Sarah, you have packed up your things, left the comfort of your routines, and journeyed to this square in order to interrupt the complacency of our society with unjust and irrational ways of living. You are accused of being a nuisance; mocked for being idealistic; and dismissed for not offering specific policy agendas for how to fix the our unstable economy, the banking system, declining social services, and complacent politicians.

Such critics miss the urgent need in our society for people with the courage and imagination to ‘hope against hope’. We need people who are unwilling to ignore that we are living in a time of crisis; willing to risk hoping that things can change; and prepared to ask their fellow citizens to admit that there are urgent issues that need to be resolved..

The playwrite Bertolt Brecht once wrote: ‘When a crime is committed, just as the rain falls, no one cries, Halt!’ The Occupy LSX movement have found the courage to stand up and say Halt! Halt the rising poverty and neglect of our social institutions! Halt political stagnation! Halt short term thinking; Halt procrastinating over issues we cannot afford to ignore!

You offer this witness to us, not because you think you have all the answers. You don’t claim god-like power, but simply follow a path similar to that tread previously by Abraham and Sarah: a leap into the unknown. You don’t know where this will lead. We don’t know how our society will respond. But by interrupting our complacency with the current state of things, you offer to us the chance to begin a turn our attention to the critical issues of our time. Your witness reminds us that we are ignoring the decline that, if we take the time to notice, is all around us.

Today we gather to give thanks for this witness of Occupy LSX; to offer our thanks and support; to offer you our prayers. May you continue to find the strength to follow the vision that has led you to this place; may you continue to have the courage to hope against hope; may those who inherit this vision from you be more numerous than the stars.

link to Letter in The Guardian

Dedeoğlu, Çağdaş : International Research Network for the Study of Science & Belief in Society

Çağdaş Dedeoğlu is a posthuman scholar of political science, specializing in political ecology of religion, science, and security.  He currently teaches philosophy and humanities at Yorkville University in Toronto, ON (Canada). He is also a research associate at the US-based Center for Critica...
View on Facebook
·Share

The Influence of Norman Lear on the Religious Left: L. Benjamin Rolsky — THINGS NOT SEEN