Steve Bruce, “A British perspective on the critical sociology of religion” 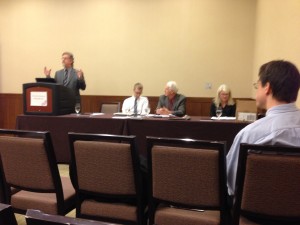 “Toward a Critical Sociology of Religion”

at the 75th Annual Meeting of the
Association for the Sociology of Religion,
11th August 2013 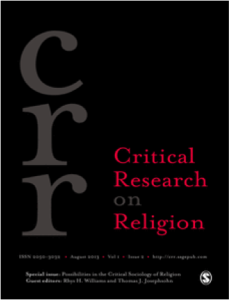 The SAGE journal Critical Research on Religion (CRR) sponsored a session at the 75th Annual Meeting of the Association for the Sociology of Religion (ASR), which was held at the Doubletree Metropolitan Hotel in New York. Organized and convened by Rhys Williams (Loyola University of Chicago), the title of the session was “Toward a Critical Sociology of Religion.” Professor Williams is past present of the ASR, the SSSR (Society for the Scientific Study of Religion), and was editor of the Journal for the Scientific Study of Religion (JSSR), the highest ranked journal in the sociology of religion, for five years. Participants on the panel were Mary Jo Neitz (University of Missouri, Columbia), Todd Fuist (Western Washington University), and Courtney Ann Arby (Loyola University of Chicago). All of the participants were contributors to the special issue, guest edited by Professor Williams, entitled “Possibilities in the Critical Sociology of Religion” (Volume 1, Issue 2, August 2013). 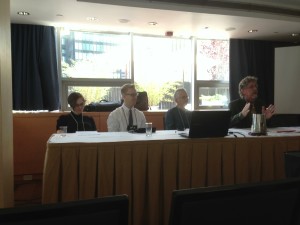 Rhys Williams introduced the three panelists and provided an explanation behind the journal and the special issue. He pointed out that CRR can bridge the gap between the social sciences and humanities, bringing the sociology of religion in conversation with religious studies. He explained that a critical sociology of religion should be methodologically eclectic and not just confined to critical theory. Agreeing with the findings of a recent article by David Smilde (posted on the Immanent Frame blog of the Social Science Research Council), he argued that too much of recent sociology of religion has only focused on the positive aspects of religion without focusing on the negative.

Mary Jo Neitz gave a talk on her article in the special issue of CRR entitled “Insiders, Outsiders, Advocates and Apostates and the Religions They Study: Location and the Sociology of Religion.” Using feminist standpoint theory as her basis, she argued one must take into consideration the position of the researcher in relationship to that of the researched. Agreeing with the arguments made in the volume edited by Bender, Cadge, Levitt, Smilde (Religion on the Edge, Oxford University Press, 2012), too much research in the sociology of religion has been written by mainstream American Protestants who write about mainstream American Protestantism. Neitz presented her location matrix which takes into consideration whether both the researcher and researched are part of the dominant culture or a marginal culture and whether they are an insider (adherent) or outsider (not an adherent). As a solution to this problematic, Neitz called for “more reflexivity in all of our work.”

Todd Fuist presented the article that he coauthored with Thomas J. Josephsohn (Loyola University of Chicago) entitled “Lines that Matter, Lines that Don’t: Religion, Boundaries, and the Meaning of Difference.” This was based on interview data of members of a number of different denominations that came out of their doctorial dissertations. In this article, they discuss religious boundaries- whether they are permeable or impermeable, relevant or irrelevant. Religious differences may be more or less relevant and the boundaries between people of different religious groups may be more or less permeable. This will shape the attitudes that people of different religious background have to each other.

Finally, Courtney Ann Irby discussed her article entitled “Evangelical Elites and Young Adults Negotiating the Disrupted Landscape of Christian Relationships.” Irby’s research was based upon interviews she conducted with students at Christian evangelical colleges. Using as her baseline a number of books that were written by Christian evangelical elites, she asked students about their attitudes toward courtship, dating, and hooking up. While she found that most students had never read these books, they were indirectly influenced by them through their parents. Although the students did not embrace the ideal of courtship advocated by these books, this nevertheless did play a role in their attitudes toward dating and even more so to casual hooking up.

In the discussion, the authors were asked whether they had a particular theoretical frame that guided their analysis. While a few of the authors identified particular theories by which they were influenced, they all concurred that their research was inductive and not deductive- that rather than theory guiding their research they developed theories out of their research. These theories are implicitly critical and thus expand our understanding of the possibilities of a critical sociology of religion.

Thomas Josephsohn and Rhys Williams, “Possibilities in the Critical Sociology of Religion” 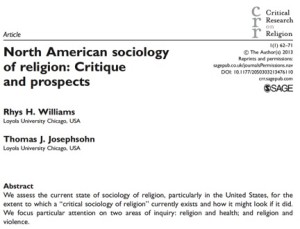 Center for Critical Research on Religion shared a post.

No, Bernie Sanders Isn’t a Socialist

John Sanbonmatsu is perplexed and exasperated about people's hysteria over Sanders being a socialist because, according to Sanbonmatsu, he isn't.
View on Facebook
·Share

Civic Religion and the Secular Jew

Center for Critical Research on Religion shared a post.

When this happens, it's usually because the owner only shared it with a small group of people, changed who can see it or it's been deleted.
View on Facebook
·Share